Linux user would know what is a pipe, and named “|” as the pipe character. Named pipe is actually similar, the difference is, a linux pipe persist as long as the process that uses the pipe last. But a named pipe persist even if the process have closed.

Why you need a named pipe? It is actually a nice way to provide IPC to 2 processes. The coolest thing of all, It is shares file semantics, i.e you can use open() and close()

Here is how you create and use a named pipe

Of course you can replace cat and echo with your own process. One way this is really useful is by opening the pipe in your program.

This is how you write a writer

Writer in python
Python
this is the reader

As you can see it shares semantic with file object, with open(), read(), write(), but with caveat.

Here you are a simple way to do IPC on linux using file semantic.

So recently I finally found out how to do copy and paste on gnu screen, previously I just do a drag on a mouse.

Previously I have tried to extract pdf information by converting PDF to text, as described here.

Problem is,  a big wall of text is very hard to process.
Here come pdftohtml it is part of the poppler package on linux. But gnuwin do not have it for windows. Which is one reason I use pdftotext.

You will get your html file. But it is a bit plain as they just extract text from it. It there is image inside pdf, or you pdf is pretty complicated, like Malaysian Hansard. You can use the -c

Here is the catch, it will generate 1 html per page in the pdf, with images. But the layout is maintained. For document like Malaysian Hansard, it would be hundreds of page.

Then there is way to produce xml

You will get an xml file which the position information.

p.s I’m using this for http://opendataday.org/ Whether there will be result today.

So I have recently involved with a project to extract data from PDF. Which is actually evil, but that is not important now.

On linux there is a set of utilities comes with xpdf program. It should be part of the default package installation, if not, you just apt-get or yum it.

On windows you can go to the gunwin32 page, I just download the zip just so i would not have to remove it with a uninstaller.
http://gnuwin32.sourceforge.net/packages/xpdf.htm

I don’t really need the layout information, on it. so I just use pdftotext.

The -layout would maintain the layout of the text as from the pdf. Otherwise, the positioning for certain text will be inconsistent.

Recently I help maintain some server, sometime I tend to move around. So I decide to make my phone to be useful.

Android actually have a couple of app that is useful to remotely access a machine. Some of them is free.
For connecting to SSH, I found that connectbot works extremely well. It only does ssh and telnet, and thats about it. It is pretty straight forward to use. For accessing windows server, I use 2x client. Which again another another straight forward RDP client. Both connectbox and 2x client is free, and that is awesome.

The only issue on using android phone to access a server remotely is. I have a desire hd. While the screen is pretty large for a phone, typing command via ssh or, navigate around a windows server via RDP can be still a pain. It is still smaller that most desktop screen. And I don’t have a full size keyboard on the phone. Which is another pain especially I access linux server most of the time.

So it can be a pain to use at time. But for quick fix or checking on server. This work pretty well.

I attached some links for the app below

So not too long ago I have posted on twitter

This spin to a few other way to do grep.
A few have suggested on IRC and facebook, the i parameter is to make keyword not case sensitive.

Another suggestion on IRC.

Then the last one I discovered on google is ack-grep

ack-grep output is nicer, and automatically ignore binary. It is slightly different than grep. But both get the job done., to me anyway

So I got like a few folders with different version source code, erm text files which I am comparing in my work. Either way, thanks to unix tools like diff and patch, things is some what easier. Though it is better to use version control, which I stupid enough not to

to compare files with diff, it is just a matter of

then my team is creating the file on windows, which have \r\n, and me on linux, which \n. So to avoid this on diff

this should able to ignore difference in white space character such as \r\n, which may not be a wise choice for python, because of the indentation sensitivity, which I trust my team sane enough not to mix tab and space(yes, for non-python progammer you can all laugh)

Since I have a directory, so i would run

pipe it to less just for making it readable.

If i’m lucky, it is just adding stuff to the text file, i would generate a patch, for that file by

and applying it with

in the folder. which i should really use -p1 option in the patch command, but there is a few folder have the same name, so i just put it in that folder and run it without -p1

of course sometime thing is not as easy. so it is nice to use to see all the difference with highlighting. which here i use vimdiff. which i use

Then I realize that doing all the diff and patch can be a pain in the back. So, a better use the code with version control, what ever reason, or how rush it is. 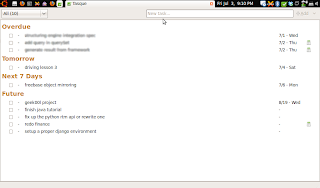 So i got a remember the milk account. What’s cool is, it is a nice web based, todo list. What really sucks is, there is no desktop client on linux. Until now.

Tasque is a todo list manager, it have a local file backend, and most importantly, it can use remember the milk, as backend.

It is pretty easy to use, just enter task, and it is done. One interesting thing is, you can enter “do something today” it will automatically, fill in the date for today.

What really sucks is, it don’t have notification. But it is useful enough, to use.

But i can’t seems to get it work, with fedora. Enlighten me please 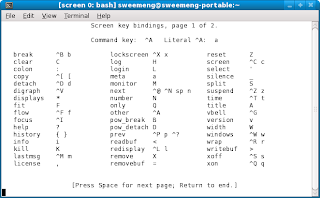 screen is a full screen windows manager that, multiplexes several process. Usually active shells. As quoted from the man page.

BTW I found that this is useful for my eeepc as well. Consider that, I found that console apps tend to save a lot of screen space…And too much windows open, then to be hard to navigate.

So I need to sync a folder between 2 computer my laptop, and PC.
So one way is to use scp, but I don’t quite want to replace the folder. Just files I created. I just want to make sure the folder is in sync.

So I play with rsync. Which track changes of the files, and transfer the changed file only. From what I understand from wikipedia anyway.

And what so cool.The command is similar to scp, or cp. So the command for rsync is:

So just change source with files, hostname with hostname or ip.

So another tools I learned as a newbie……