The story of Ubuntu started in 2005, I was just a Debian user, then my computer hard disk died.
So I just book a few cd while waiting for money to come in to buy my hard disk, I can’t download an image anyway. I was using Knoppix around then. Before that, Debian, then Mandrake, then Debian for a year.

I booked 10 few cd, you’ll be surprise how long it take for me to give it out. Lecturer is not interested(welcome to Malaysia), only few friends want it. Give a few to the computer club.

Within 4 years, it grows from a Debian derivative that automate a few installation task, and a few script. To a distro that make thing so easy. And after that, linux in general gone mature as a desktop. Hell I barely use command line, as the result.

So you can blame Ubuntu for making me lazy, making me a lazy software developer, hehe. But an powerful OS, with mature backend, and good frontend, is pretty appealing.

A short story of ubuntu, and a happy birthday…

What I noticed is there is a number of promotional effort by the Linux community in malaysia. Usually by the same group. In the malay language

Here is the links for their slide show in
http://www.jomlinux.com/v1/index.php/20090208211/Artikel/Berita/Slideshow-dari-e-kedai-Jom-Linux

They also have a video on how Ubuntu linux is used in the Parliment Office in Ampang.
http://www.jomlinux.com/v1/index.php/20090203209/Artikel/Berita/Dokumentari-Mini-Ubuntu-Di-Parlimen-Ampang

Some time it is nice to actually able to share keyboard and mouse between my laptop and desktop.
The good news is, synergy actually allows such functionality, and it give the ability to share the clipboard too, meaning you can drag and drop between 2 computer.
To start using synergy

On ubuntu go to the menu

system -> administration -> synaptic to install it. Or you can just

A member of the malaysian ubuntu loco, have comes out with a kit. Comes with a handbook, and packaged, it is meant to make it for most people to learn linux. And yes, it is meant for malaysian in general, which is why, it is in Bahasa Melayu, Malay language.

It comes with a booklet(printed in color), ubuntu stickers, cd and a casing.And it is RM 13.99.

It is another day where I have a little adventure with my new toy, my eeepc 1000h. What I don’t satisfied is the boot time, I got around 40 second on ubuntu on ubuntu using the adam’s kernel.

So before to optimize, we need to investigate.

Bootchart is a way to show the boot process, in the end of the boot, you will get a chart, that shows the process.

To install on ubuntu

The chart generated from the boot process, is stored in /var/log/bootchart. It is a png image.

So the result that I get, from my setup 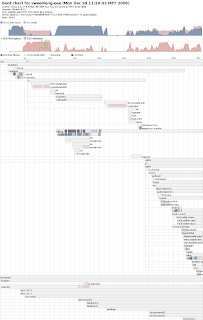 It is one thing to know, now, how to optimise it?

Finally got adobe air working. And it is really not hard
It is from here the links below.
http://www.adobe.com/cfusion/webforums/forum/messageview.cfm?forumid=72&catid=677&threadid=1349878&enterthread=y

So what twirl works,
doomi a to-do list, works with compiz on.

Here’s what I have been doing within last week:

– Was trying skype, after a very long time. Suprisingly works on my 64 bit hardy. But they give us the version 2.0, where as there is testing version of skype 4.0 for windows.
Which is a disgraced!!!!!

– Was trying to install adobe air. One it doesn’t work on 64 bit. And it didn’t even allow installation on 64 bit linux environment, even we have a 32 bit compatibility environment installed. And was trying on wine. Only to find out that twirl won’t work.

– On the positive side, there is an interesting plugin for facebook chat.
http://code.google.com/p/pidgin-facebookchat/
So far it is working. Wonder how it works…….

Last week was doing a dist-upgrade from ubuntu 7.10 gutsy to ubuntu 8.04 hardy.
Here is what I found.
1) Not many new features, i mean visible one. The few are,
– policy kit
– pulseaudio
– firefox 3
– desktop effect on kubuntu
2) A few things don’t work well, for example,
– ndiswrapper: It take some work around to make it work. it revolve around unloading the ssb and ndiswrapper module, then reload ndiswrapper first then ssb.
– Firefox 3: don’t support all the plugins.
– kde4: the one in the repos don’t work well, it works, with pulseaudio applet too, but, for some reason, gnome-panel seems to run at the same time.
3) Generally, most work better, more stable, But ubuntu don’t have shutdown button any more, hmmmm

The verdict is, it is a worthy upgrade Been sick, leg can’t walk, so I just too lazy to grab my laptop I place somewhere, good thing I have another linux box in my. I can’t really stand windows 98.

It runs xfce, and yeah it is in xubuntu 7.04. It just that it have barely 256mb of ram, shared 32mb with the built in vga. So don’t really trust it to run ubuntu.

It surprisingly mod-able. Have a few plug in, that I really fall in love with. But probably not going to be my primary desktop yet. It don’t really have integrated system management tools like system setting in kubuntu. But it is lightweight enough for me to use it for slightly older machine

There is this time, when there is a application works, then suddenly it doesn’t work anymore, it didn’t hang, it just don’t accept keyboard input anymore.

Turn out there is an solution.

then after installation, edit /etc/X11/xinit/xinput.d/scim as root

Find the line on with GTK_IM_MODULE
change it into

change the line with QT_IM_MODULE into

then restart your computer. or the ctrl-alt-backspace trick would work too.